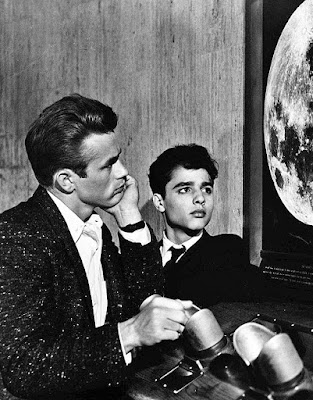 Jim Stark: I woke up this morning, you know... and the sun was shining, and it was nice, and all that type of stuff. And the first thing, I saw you, and, uh, I said, "Boy, this is gonna be one terrific day, so you better live it up, because tomorrow you'll be nothing." You see? And I almost was.

Jim Stark: Nobody talks to children.
Judy: No, they just tell them.

Jim Stark: You can wake up now, the universe has ended.

Frank Stark: We give you love and affection, don't we? Well, then, what is it? Was it because we went to that party? Well, you know what kind of drunken brawls those kind of parties turn into. It's not a place for kids.
Mrs. Carol Stark: A minute ago, you said you didn't care if he drinks.
Mrs. Stark, Jim's grandmother: He said a little drink.
Jim Stark: You're tearing me apart!
Mrs. Carol Stark: [shocked] What?
Jim Stark: You, you say one thing, he says another, and everybody changes back again!
Mrs. Carol Stark: That's a fine way to behave!
Mrs. Stark, Jim's grandmother: Well, you know who he takes after.

Jim Stark: [sitting down, hugging his father's legs helplessly] Help me!
Frank Stark: Look, Jim. You can depend on me. Trust me. Whatever comes, we'll, we'll fix it together. I swear it. Now Jim, stand up. I'll stand up with you. I'll try and be as strong as you want me to be. Come on.

Jim Stark: I don't know what to do anymore. Except maybe die.

[Looking up at stars in a planetarium]
Jim Stark: Once you been up there you know you've been someplace.

Plato: I used to lay awake in my crib at night and listen to them fight.
Jim Stark: Can you really remember back that far? I can't even remember what happened yesterday.

Jim Stark: I don't think I want anything, I'm nervous.
Frank Stark: My first day of school, I was so nervous, Mother made me eat so much, I couldn't swallow until recess.
Publicat de Andreea la 21:05