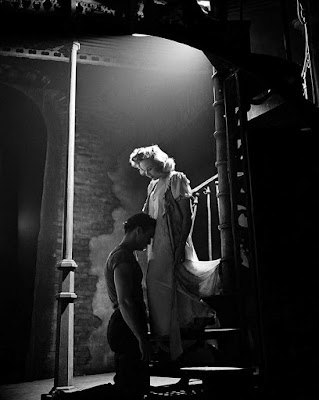 [first lines]
A Sailor: Can I help you, ma'am?
Blanche DuBois: Why, they told me to take a streetcar named Desire and then transfer to one called Cemetery and ride six blocks and get off at Elysian Fields.

Blanche DuBois: I don't want realism. I want magic! Yes, yes, magic. I try to give that to people. I do misrepresent things. I don't tell truths. I tell what ought to be truth.

Stanley Kowalski: Now that's how I'm gonna clear the table. Don't you ever talk that way to me. 'Pig,' 'Pollack,' 'disgusting,' 'vulgar,' 'greasy.' Those kind of words have been on your tongue and your sister's tongue just too much around here. What do you think you are? A pair of queens? Now just remember what Huey Long said - that every man's a king - and I'm the King around here, and don't you forget it.

Blanche DuBois: Whoever you are, I have always depended on the kindness of strangers.

Stanley Kowalski: Listen, baby, when we first met - you and me - you thought I was common. Well, how right you was. I was common as dirt. You showed me a snapshot of the place with them columns, and I pulled you down off them columns, and you loved it, having them colored lights goin'. And wasn't we happy together? Wasn't it all okay till she showed here? And wasn't we happy together? Wasn't it all ok? Till she showed here. Hoity-toity, describin' me like a ape.

Stanley Kowalski: I never met a dame yet that didn't know if she was good-looking or not without being told, and there's some of them that give themselves credit for more than they've got.

Stanley Kowalski: Take a look at yourself here in a worn-out Mardi Gras outfit, rented for 50 cents from some rag-picker. And with a crazy crown on. Now what kind of a queen do you think you are? Do you know that I've been on to you from the start, and not once did you pull the wool over this boy's eyes? You come in here and you sprinkle the place with powder and you spray perfume and you stick a paper lantern over the light bulb - and, lo and behold, the place has turned to Egypt and you are the Queen of the Nile, sitting on your throne, swilling down my liquor. And do you know what I say? Ha ha! Do you hear me? Ha ha ha!

Stanley Kowalski: She is as famous in Laurel as if she was the President of the United States, only she is not respected by any party.

Stella: I never listen to you when you're being morbid.

Blanche DuBois: Marry me, Mitch.
Mitch: No, I don't think I want to marry you anymore... No, you're not clean enough to bring into the house with my mother.


Blanche DuBois: Deliberate cruelty is unforgivable, and the one thing of which I have never,ever been guilty of.

Blanche DuBois: But some things are not forgivable. Deliberate cruelty is not forgivable! It is the one unforgivable thing, in my opinion, and the one thing of which I have never, never been guilty.


Blanche DuBois: Please don't get up.
Stanley Kowalski: Nobody's going to get up, so don't get worried.

Blanche DuBois: Straight? What's 'straight'? A line can be straight, or a street. But the heart of a human being?